MW trip to Peru and Bolivia, Day 4 – The Road to Samaipata

We did not land in Santa Cruz de la Sierra, or just Santa Cruz as everyone calls it, Bolivia, until a little after 2am. It is a three hour flight from Lima, Peru, but there is a time difference of one hour, so we lost an hour on the way.

By the time we had cleared immigration, located our bags and got to our hotel, the beautiful Los Tajibos, the clock had just ticked past 3am. Bolivian immigration officers are not terribly friendly and although it was just one medium sized plane, it took over half an hour to get through the queues. One of our party got held up – and they had to apply for an emergency visa.

It would have been lovely to have spent more time in Santa Cruz. Los Tajibos is a gorgeous hotel, centred around the inviting swimming pool (but sorry, no, no time for a swim!) – and I would certainly love to go back there.

Apparently the downtown area of Santa Cruz is very picturesque, based on the old Spanish settlement, which is laid out in a grid. A lot of the old buildings have been retained and there are bars and restaurants and lots of things to see. Apparently. Unfortunately our schedule was so tight, we didn’t have time to go downtown and wander around, but we had to get on the road to our next destination as soon as we had finished breakfast.

Santa Cruz itself is becoming a large sprawling city. Until the 1960s, it was a sleepy provincial town of no more than 60,000. All the major urbanisation had taken place elsewhere in Bolivia. However, due to the entrepreunerial outlook of the residents, there has been massive expansion and it is now considered the business centre of Bolivia (trick question: what is the capital of Bolivia?) These days the official population count is 1.5 million, but as it begins to swallow up nearby towns Santa Cruz is rapidly approaching 2 million.

Near our hotel there were lots of universities and polytechnics, and there are a number of private high schools (as well as good state schools) in the city. Municipal utilities, such as water and power, are run by local trusts or coops, which makes the tapwater apparently “almost drinkable” (no, still not taking that bet.) But there are also large groups of ethnic minorities, such as Jews, Europeans and Asians in Santa Cruz, which makes this the most ethnically diverse city in Bolivia.

Apparently after World War 2 there was organised immigration of Japanese wanting to escape the horrors of their bombed out towns and cities. Santa Cruz even has a suburb called Okinawa, would you believe. Because of this, Asian cuisine is quite popular in Santa Cruz, sushi (I have no idea where the fish comes from), various styles of Chinese cooking, southeast Asian, they have it all.

Santa Cruz is the most cosmopolitan city in Bolivia, and would be a great kick off place for a tourist. Quite different from the towns on the high plateau (altiplano), such as La Paz by all accounts.

Having said that, Santa Cruz is already at 1200 metres above sea level. However the start of the Amazon Basin is just a couple of hours drive north, while the foothills of the Andes are just to the west of the city.

It was this route that we took to Samaipata, up Highway 7 and following the Rio Pirai. Highway 7 leads into the interior of Bolivia, eventually ending up at Cochabamba, one of the cities on the high plateau at 2500 metres, or you can turnoff and head to Sucre, one of the capitals of Bolivia (yes, Bolivia has TWO capitals…)

But this road has another significance, because up this gorge Che Guevara marched his troops in July 1967, briefly capturing the town of Samaipata (he was desperately trying to find some insulin to ward against asthma), before the fled into the hills south towards Vallegrande.

Another hour or so driving west of Samaipatha, Highway 7 connects with Highway 22, the road to Vallegrande, and onto the town of La Higuera where Che Guevara was eventually captured and famously shot on 9 October 1967. It is amazing to think that is now just over fifty years ago – and it is interesting that the “Che Guevara Trail” is now being promoted by tourism operators. Certainly this gives me yet another excuse to come back to Bolivia and Santa Cruz.

The Pirai Gorge road is already a busy tourist route, with lots of adventure activities in these foothills. Many of the young people from schools and colleges in Santa Cruz come up here during the holidays, to camp out, swim beneath waterfalls and see the stars come up.

There is commercial kayaking on the river, with different grade rapids. Right beside the river is a national park, with lots of day hikes, on some spectacular mountains. Ancient volcanoes dot the landscape interspersed with lush vegetation. We are at altitude, but it is also very temperate, climate wise.

And on one of these mountains, there is even a condor viewing hike. It is recommended to only do this with a guide, as the condors are quite ferocious close to their eyries.

And at the top of the gorge is the little town of Samaipata, which has vineyards in and around it, and several small wine producers based there.

The leading producer is Bodega Uvairenda, which was originally founded by Francisco Roig and now he has one of his best friends as a business partner.

Francisco was educated in America and is a corporate finance expert, so his English was flawless. He himself is not from a wine making family, but his wife is French, which is how he got the bug for wine. And because he still had connection in the US when he did his winemaking degree he did it through UC Davis.

Our bus (which was apparently kitted out for Catholic bishops when the Pope visited Bolivia) slowly wound its way out of Santa Cruz and passed through the outlying towns, now virtually swallowed up by the city. Then someone asked whether we had any water, so the decision was made to stop at a roadside store. While we were waiting at the side of the road, I noticed that there were lots of people outside the shop pounding away at something under an awning. I got out to have a look.

What they were pounding were coca leaves – the shopkeeper was filling little green bags of coca leaves for sale and the customers would then take these wooden mallets to crush the leaves and liberate the essential oils. Some of our hosts purchased a few bags of leaves and so we got to try coca on our way up to Samiapata. I had been very sick for a week or so and was coughing really badly – the coca not only helped clear my sinuses and supressed the coughing, for a short while at least. Yes, your tongue goes a little number of you chew the wad of coca in the appropriate place. 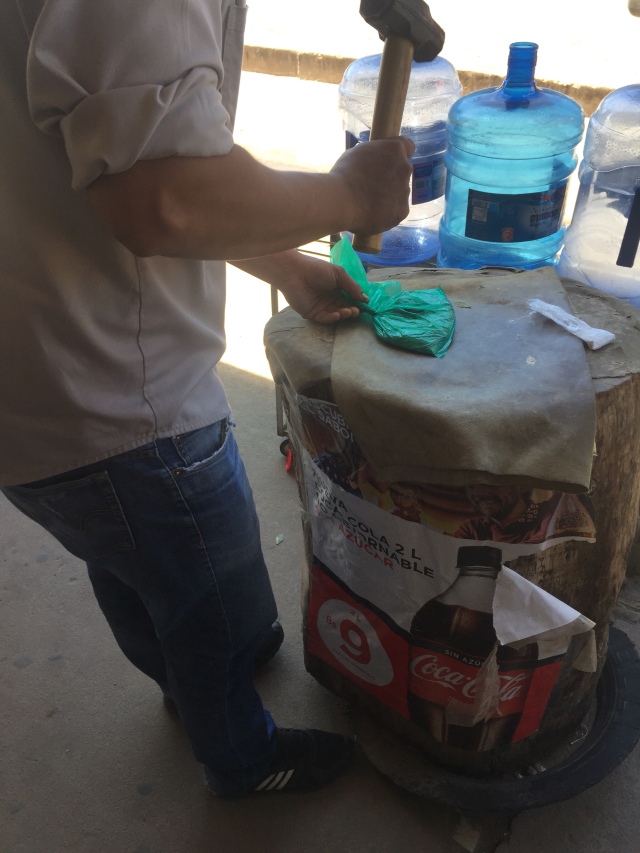 It seems that coca leaf chewing is frowned on by polite society, but a lot of truck drivers rely on the stuff to keep them awake. Seems to be a habit among poorer people, a little like smoking. We saw these little green bags elsewhere in Bolivia. It was certainly an interesting experience.

The gorge road is very windy and in places tight. Our journey was slowed somewhat by the work going on, it seems that this road is being upgraded, with new culverts and bridges and some much needed widening around several bends. There were workmen everywhere the day we went up, with a couple of one way Stop/Go sections. It will be great when it is finished (although some of the engineering in places looks a little questionable.)

I asked Francisco about getting to Samaipata from Santa Cruz. There are several local buses, though they do not look especially fast. He thought it about a little, then advised that the cheapest (and most direct) option would be to catch a cab. Apparently this is not outrageous as it seems, even though it would be an hour and a half to two hour drive. It is a lot slower by bus – believe me.

The little town of Samaipata looks like your typical Bolivian town, with traditional walled courtyards and verandahs, but there are heaps of tourist operations advertising their wares on footpath signs and several budget hostels. Apparently they recently got their very first luxury B&B, followed shortly after by a second. The local wine bar is run by a couple of Aussies and there is very good 3G coverage here apparently (but not if you are a customer of Vodafone NZ, it seems.)

Samaipata, and the other agricultural valleys surrounding Santa Cruz, was where some of the earliest wine was made in Bolivia. The Catholic Church sourced altar wine from this region, since grapes couldn’t survive on the high plateau. Conditions are kinder here, it is more temperate and there is enough water for vines to thrive. Pretty much everyone in Samaipata grew grapes during the Spanish rule. Even today, walking around the town you can see some of the walled gardens at the back of people’s houses where wild vines are growing.

Samaipata is a cute place – and I cannot wait to return.